The Grand Hotel Inglés: a walk through its history 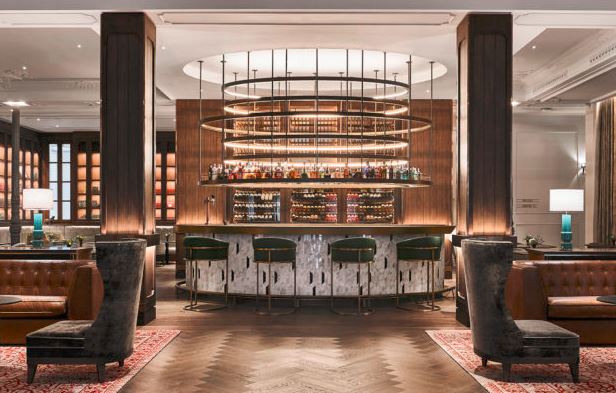 During March this year, the Grand Hotel Inglés in Madrid was reopened, located at Calle Echegaray 8, in the well-known ‘Barrio de las Letras’ or ´Literacy Quarter´.This luxury hotel with 48 rooms is the oldest in Madrid, and since its inauguration has shown that it still retains the class and style of the 19th and 20th centuries that characterize it.

It was officially opened on December 16, 1886 under the management of Agustín Ibarra, who invested “$90,000” in the project, about €2,700, that were used to create this Luxury Hotel which at that time had 110 rooms. Although the location is the same as today, what we know today as Calle Echegaray then was Calle Lobo, named in honor of a hunter who lived there and exposed the skin of the animal at the door of his house.

In 1892 it was named a First Class Establishment for its excellent decoration and service, as well as for the prestige of the guests who stayed there. The appointment was published in all the newspapers of the world and made it gain the world fame that still holds.

In 1907 several Spanish literary female writers paid tribute to the English writer Rachel Challice among its walls, and this love of literature is still present in a reading room that recalls the old libraries of the manor houses of Madrid and has 600 volumes. Great National and International writers have stayed at the Grand Hotel Inglés since its inauguration, such as Ramón del Valle-Inclán, Benito Pérez Galdós or Virginia Wolf.

During the years of the Spanish Civil War the hotel functioned as a hospital to serve the needs of the moment, after which it reopened under the name Hotel Imperio to show the sympathy of the country towards ‘el Eje’ (During WWII, the bloc formed by Berlin-Rome-Tokyo against the Allies). In those times the rooms still didn´t have bathrooms, so its guests had to cross the corridor in search of the ladies or gentlemen’s restrooms. The reform that provided a bathroom to each room was carried out in 1964, and reduced the number of rooms from 110 to 58.

In 2008 the city of Madrid paid tribute to the accommodation with a commemorative plaque that can still be seen in its lobby. A few years later, what had been the most luxurious and important hotel in the capital in the 20s, closed its doors for more than 5 years until March 2018. Its rebirth comes hand in hand with Hidden Away Hotels and its goal is clear: to recover the elegance, sophistication and comfort that have always defined it.

However, the financial team regrets not being able to keep the prices of 4 pesetas per Room and 12 pesetas per Full Board published in January 1914 in the newspaper Crónica. As they justify, the cost of living has gone up a lot since the times of Don Agustín …